Naritasan is a time-honored temple with a history of over 1000 years since its foundation. On the temple grounds, there are five buildings designated as important cultural properties. Komyodo, the oldest building among them, was built in 1701, when Naritasan became popular along with Kabuki and one of the temples representative of the Japanese style. The next oldest building is a three-story pagoda, which was built in 1712, and in 1830, a Deva gate was constructed. An elaborately carved Shakado (a hall where a statue of Shakyamuni is enshrined) was built in 1858 and Gakudo, which houses a number of votive picture tablets dedicated by celebrities of the Edo period, was completed in 1861, when Sakamoto Ryoma played a key role as a leader of the movement to overthrow the Tokugawa Shogunate. Thanks to carpenters specialized in temples and shrines in the Edo period, these buildings, some of which are over 300 years old, still exist and are appreciated by visitors. We hope you come and appreciate the temple history of over 1000 years and fully enjoy the atmosphere reminiscent of the Edo period on the vast grounds of Naritasan.

History of over 1000 years
since its foundation

810: Kukai (a founder of the Shingon school of Buddhism) carved an image of Fudomyo.

The image of Fudomyo, which is still enshrined in Naritasan, is a valuable piece of sculpture made by Kukai in the Heian period by order of Emperor Saga. Kukai is one of the most famous monks in Japanese Buddhism. He went to China, was initiated into esoteric Buddhism, and brought back esoteric teachings to Japan. As a man of deep faith, Kukai carved the image of fudomyo in such a manner that for each line he chiseled, he prayed three times.

Taira no Masakado, a samurai in Kanto, led a rebellion against the Imperial Court of Kyoto as he referred to himself as the new emperor. In the age of provincial wars, people lived in constant fear and confusion. At the Imperial Court, Emperor Suzaku, who hoped for an immediate end to the rebellion, ordered Kancho, a Buddhist priest of the highest order, to take the image of Fudomyo made by Kukai to the battlefield to suppress the rebellion. He sailed by ship from Osaka to Odaregahama on the Kujukuri-hama.

The great priest Kancho enshrined the image of Fudomyo in Narita and prayed for the end of the rebellion by burning goma (small pieces of wood on the altar to invoke divine help). On the last day of the goma ceremony, Taira no Masakado was defeated and peace prevailed in the country. The great priest Kancho decided to go back to Kyoto, but the image of Fudomyo would not move. The image suddenly opened its mouth and said that Kancho should stay in Narita and save people there. This mysterious happening is the origin of Naritasan.

In 1703 during the Edo Period, Naritasan carried the image of Fudomyo into Edo to show it to people in Edo. This is called the “unveiling of Fudomyo in Edo.” Around this time, Ichikawa Danjuro, a popular Kabuki actor, played the role of Fudomyo on stage, which became a hot topic among people in Edo. Many people came to see the performance by Danjuro, and Kabuki gained great popularity. Today’s kabuki reflects many features of Fudomyo as the close relationship with Naritasan has been handed down to successors to Ichikawa Danjuro. The current 12th Danjuro also visits Naritasan. 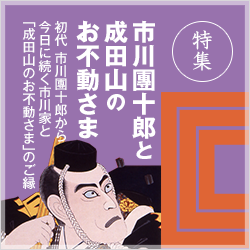